Arya and the Hound : Cold Hearts

Matted to 16″ x 20″ and mounted in a beautiful custom cornered frame, ready for hanging.

Taken from the writings of George R.R. Martin’s A Song of Ice and Fire, Arya awaits the slow death of the Hound.  Each heart growing colder.

Please note that international buyers will need to pay extra for shipping (~$100) due to the large size of the framed piece.  The drawing can be shipped internationally with only it’s mat for the standard shipping fee. 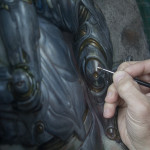 Since beginning his professional career in 1993, Donato’s list of clients has grown to include major book publishers in New York to concept design firms on the West Coast: notables include The United Nations, LucasArts, National Geographic, Scientific American, CNN, DC Comics, Microsoft, The Village Voice, Playboy Magazine, US Postal Service, Wizards of the Coast , Scholastic, Simon&Schuster, Tor Books, Random House, Time/Warner, The Scifi Channel, Milton-Bradley, and Hasbro. Merits range from the Hamilton King Award from the Society of Illustrators in 2008 to twenty-three Chesley Awards from the Association of Science Fiction and Fantasy Artists, three Artist Hugo Awards for outstanding professional work from the World Science Fiction Society, notable awards from the Art Renewal Center, and six silver and two gold medals from the juried annual Spectrum: The Best of Contemporary Fantastic Art.