The Founder’s Void Manuscript, Chapter VIII: Tectonic Trespassing of Lesser Gods at the End of an Era

The Void Manuscript is a non-linear manuscript “written” visually to contain secrets, hidden dealings, corrupt acts and demons. It was worshiped, analyzed and had fueled generations of worship over the mysterious authors of this book, The Founders. Like a lost language, each shape is a word, and each word reveals narratives. It’s true intentions lost to time.

Before the Nations of the Endless Seas reached the end of the Fifth Era, a cataclysmic event known as The Tectonic Trespassings of Lesser Gods occurred. Lesser Gods, who’s middle child status of being more powerful than the mortals of the soil, and being subordinate to the Higher Gods of the land, looked upon the mortals in jealousy, who started to expand technologically. The Lesser Gods saw their rise in prominence as a threat. With fears and paranoia that these mortals, who by each era started living longer, building faster and tapped into sacred, ancient knowledge that even the Lesser Gods knew nothing of, the Heavens above rained hell fire onto

The Nation of the Endless Seas. The people of the land were devastated in this apocalyptic event. The Eldritch Horror, a multi-armed corruption produced by the paranoia of Lesser Gods, tore up the land to consume the advancements that the mortals achieved. This event changed the landscape, dismantled empires in a matter of hours and caused an entire generation of surviving mortals to have an incredible distrust of The Heavens Above. 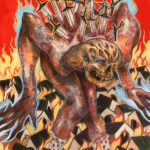 Sishir Bommakanti is an illustrator, animator and painter based in Minneapolis. His work ranges the paranormal, mythological and the surreal.

We are gifting FREE shipping through Dec 23rd

CHECK OUT THE LATEST RELEASE