Ceratosaurus was a carnivorous theropod who lived in the Late Jurassic period, between 153-148 million years ago.  It is most well known for its cerated-looking horn above it’s nose and it’s two small horns above the eyes.  Ceratosaurus ranges from 17 ft. long to one specimen measuring in at 23 ft. long.  It also had osteoderms (skin-bones) along the ridge of it’s back and head, and in various places throughout it’s body.  Fossils have been found in Colorado and Utah, but also in the Lourinhã formation in Portugal.  Ceratosaurus was one of the earliest discovered dinosaurs back in 1883 and 1884, so depictions of the dinosaur have changed quite drastically over the years, some early illustrations showing it having almost a unicorn looking horn growing out of its nose.

Ceratosaurus is one of those dinosaurs that has always been around in toy culture, so I remember having many very small rubber ceratosaurs in my childhood.  Recently I have noticed it popping up in various basic dino toy sets of my daughter’s, so I thought I’d finally paint this bad dude.  Not that I’ve watched it recently, but I always liked the landscapes that Mrs. Fox was painting in the Wes Anderson Fantastic Mr. Fox film.  She always had a bolt of lightning in the background, so that was my inspiration for the composition. 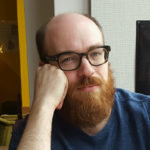